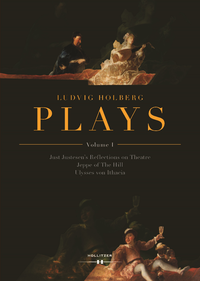 Ludvig Holberg (1684–1754) is to the Danish stage what Shakespeare, Molière and Strindberg are to their national stages – and the world. In his day, Holberg was part of the European literary canon; in the Nordic region, his work forms the backdrop to writers such as Søren Kierkegaard, Hans Christian Andersen, Henrik Ibsen and Karen Blixen. The quality of Holberg's writing, the universality of his themes, his understanding of stage and auditorium, more than qualify him to resume his place on the international stage. This first volume in a trilogy of new translations starts by presenting Holberg's 'poetics of dramaturgy' in the short treatise Just Justesen's Ref lections on Theatre, followed by two of his robust comedies dealing with power, illusion and dreams of greatness. Jeppe of The Hill depicts the lowly peasant who is momentarily elevated to a position of splendour. Clad in the trappings of his new and powerful status, he is soon well on the way to upending the established social order. But, alas, it was all a stage-managed trick, exposing the fundamental dilemma of (his) existence: "Am I dreaming, or am I awake?" Ulysses von Ithacia is essentially a surreal harlequinade about self-delusion, craving for empire and the heroic roles played in corridors of power. A metatheatrical play exposing the absurdity of war and stripping this pompous ruler of his 'new clothes'. "I never tire of reading Holberg's plays." Henrik Ibsen, 1869