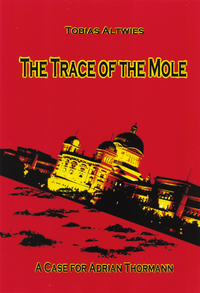 The Trace of the Mole — Ebook

A Case for Adrian Thormann

The Trace of the Mole is a thrilling detective novel. The scene of events is Bern, the capital of Switzerland, normally known as a handsome place for civil ser-vants, students and tourists. Malicious tongues say that Bern is twice as large and half as entertaining as the central cemetery of Vienna. Additionally, the world of public administration in general ranks as stale and boring. Therefore, activities concerning the public administration in Bern must take effect of a strong soporific. Adrian Thormann, a shrewd and upright lawyer and investigator in Bern, wouldn't sign this statement any longer. Since a young man asked him to examine the investigation of the police on the occasion of the accidental death of his uncle, Thormann slides more and more deeply in a swamp of shadowy intrigues among intelligence services, hardboiled transnational brokers, roughshod gangsters, crooked police officers and odd civil servants. More and more, his investigation runs into a nightmare, but he can reckon on his niece Helen Bauer. She is a young student in history and supports him as a eupeptic part-time assistant. Finally, Thormann's surviving depends on her and some steady friends.