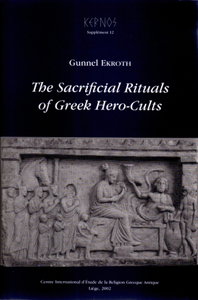 This study questions the traditional view of sacrifices in hero-cults during the Archaic to the early Hellenistic periods. The analysis of the epigraphical and literary evidence for sacrifices to heroes in these periods shows, contrary to the traditional notion, that the main ritual in hero-cults was a thysia at which the worshippers consumed the meat from the animal victim. A particular handling of the animal’s blood or a holocaust, rituals previously taken to be typical for heroes, can rarely be documented and must be considered as marginal features in hero-cults. The terms eschara, escharon, bothros, enagizein, enagisma, enagismos and enagisterion, believed to be characteristic for hero-cults, are seldom used in hero-contexts before the Roman period and occur mainly in the Byzantine lexicographers and in the scholia. Since the main kind of sacrifice in hero-cults was a thysia, a ritual intimately connected with the social structure of society, the heroes must have fulfilled the same role as the gods within the Greek religious system. The fact that the heroes were dead seems to have been of little significance for the sacrificial rituals and it is questionable whether the rituals of hero-cults are to be considered as originating in the cult of the dead.