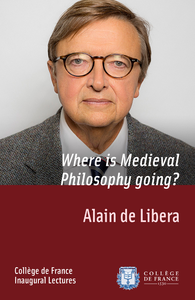 Where is Medieval Philosophy going? — Ebook

Where is medieval philosophy going? It is going to where philosophy is. And it is there where philosophy is going. It became medieval once the Middle Ages were over. It was only philosophy when the Middle Ages were still saeculum modernorum, the “century of the Moderns”, for those living in it. Today, it is going there where she or he who wants to recount, that is, to relate its history, must go. The archaeology of the subject draws us, in any case, through space and time, from the Council of Chalcedon (451 CE) to 18th-century Scottish philosophy, then to 19th-century Austrian philosophy, and finally to the 3rd-millenium “deconstruction of the deconstruction”. It is an Averroist project for post-post-modernism.