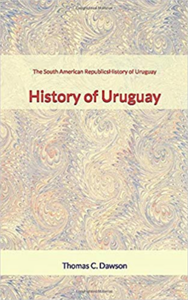 "Uruguay is the southeastern country of South America. It extends from latitude 30° to 35 degrees S. and from longitude 53° to 58° 30' W., lies south of the Province of Río Grande do Sul, Brazil, and east of the Río Uruguay, hence its local name, Banda Oriental, given in the old Spanish days...Uruguay has been the Flanders of South America. Her admirable commercial position at the mouth of the river Plate has made her capital one of the great emporiums of the continent. On the track of the world's commerce, open to the currents of intellectual and industrial life which sweep from Europe into the luxuriant country of the southern half of South America or around to the Pacific, her people have always been in the vanguard of Spanish-American civilisation. Her productive, well-watered, and gently rolling plains are well adapted for agriculture and unsurpassed for pasturage. Here the Indians struggled hardest to maintain themselves and longest resisted the Spanish conquest. From colonial times, Argentines have crowded in from the west, Brazilians from the north, and Buenos Aireans and Europeans from the coast, until this favoured spot has become the most thickly populated country of South America."