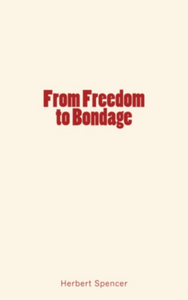 From Freedom to Bondage — Ebook

This book based on the work of Herbert Spencer, is published in the collection “History of Scientific Knowledge”
"Speaking broadly, every man works that he may avoid suffering. Here, remembrance of the pangs of hunger prompts him; and there, he is prompted by the sight of the slave-driver's lash. His immediate dread may be the punishment which physical circumstances will inflict, or may be punishment inflicted by human agency. He must have a master; but the master may be Nature or may be a fellow-man. When he is under the impersonal coercion of Nature, we say that he is free; and when he is under the personal coercion of someone above him, we call him, according to the degree of his dependence, a slave, a serf, or a vassal. Of course I omit the small minority who inherit means: an incidental, and not a necessary, social element. I speak only of the vast majority, both cultured and uncultured, who maintain themselves by labor, bodily or mental, and must either exert themselves of their own unconstrained wills, prompted only by thoughts of naturally-resulting evils or benefits, or must exert themselves with constrained wills, prompted by thoughts of evils and benefits artificially resulting.
Men may work together in a society under either of these two forms of control: forms which, though in many cases mingled, are essentially contrasted..."