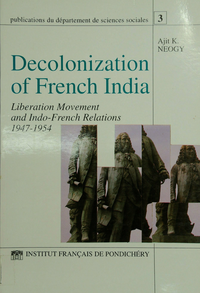 The central theme of the book has been woven round the five French settlements in India with Pondicherry as their headquarters which France intended to retain even after Britain had quitted on 15 August 1947. France had neglected her Indian settlements over the years and finding a profound change in the attitude of her people after 1947, she tried to mollify them by introducing certain doses of administrative reforms which were unacceptable to them. Inspired by the events of the neighbouring subcontinent, they expressed their desire to identify themselves with their brethren across the border and demanded the merger of the settlements with Indian Union which was, quite naturally, rejected by France. The rejection was followed by the launching of liberation movement. Repressive measures unleashed by Pondicherry government proved ineffective. Along with this there was a strong diplomatic pressure exerted by New Delhi on Paris for withdrawing from the five pockets. France dithered and delayed the solution which further exasperated the people. Events in North Africa and Indo-China were also going against her. The stalemate continued for seven years until Pierre Mendès France came to power. Meanwhile Chandemagore was transferred to India by referendum. However, diplomatic parleys started at the initiative of the French Prime Minister broke the thaw and facilitated the path for peaceful merger of the four south Indian settlements with India. Thanks to the diplomatic efforts and the spirit of conciliation manifested by the two governments, the problem of the French Indian settlements was amicably resolved thereby opening an era of cordiality between the two countries.