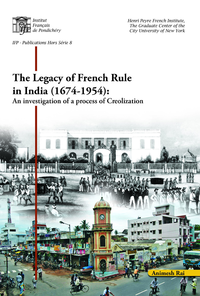 An investigation of a process of Creolization

Creolization can be defined as an interaction of heterogeneous cultures leading to a new and unexpected reality. This book is an attempt to investigate whether or not nearly three centuries of French presence (1674- 1954) in the former French territories of India (Pondicherry, Karaikal, Mahé, Yanam and Chandernagore) have led to creolization. Can one say that there are traces of French colonization, language and culture in the former enclaves? If so, what is their significance with respect to India as a nation? The investigation has been based on an analysis of historical facts and ground realities gauged from an observation of local life and conversations with people of these territories.