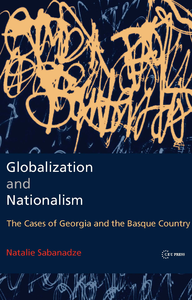 The Cases of Georgia and the Basque Country

Argues for an original, unorthodox conception about the relationship between globalization and contemporary nationalism. While the prevailing view holds that nationalism and globalization are forces of clashing opposition, Sabanadze establishes that these tend to become allied forces. Acknowledges that nationalism does react against the rising globalization and represents a form of resistance against globalizing influences, but the Basque and Georgian cases prove that globalization and nationalism can be complementary rather than contradictory tendencies. Nationalists have often served as promoters of globalization, seeking out globalizing influences and engaging with global actors out of their very nationalist interests. In the case of both Georgia and the Basque Country, there is little evidence suggesting the existence of strong, politically organized nationalist opposition to globalization. Discusses why, on a broader scale, different forms of nationalism develop differing attitudes towards globalization and engage in different relationships.Conventional wisdom suggests that sub-state nationalism in the post-Cold War era is a product of globalization. Sabanadze’s work encourages a rethinking of this proposition. Through careful analysis of the Georgian and Basque cases, she shows that the principal dynamics have little, if anything, to do with globalization and much to do with the political context and historical framework of these cases. This book is a useful corrective to facile thinking about the relationship between the “global” and the “local” in the explanation of civil conflict. Neil MacFarlane, Lester B. Pearson Professor of International Relations and fellow at St. Anne’s College, Oxford University and chair of the Oxford Politics and International Relations Department.