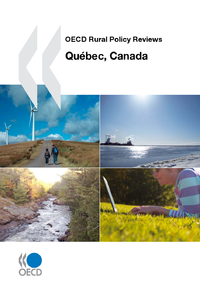 OECD's review of rural policy in Quebec.  It finds that in rural Québec, both population and personal income are growing, on average, and the province’s economic base continues to diversify. Land occupancy is more homogenous than in the rest of Canada, due to the presence of denser networks of small and medium-sized communities. However, mirroring the situation at the national level, the province displays large regional disparities. The sustainability of some rural communities, especially if remote and resource-based, is challenged by demographic and economic decline. In this context, Québec has developed one of the most advanced rural policy approaches in the OECD, closely in line with the framework suggested in the OECD’s New Rural Paradigm. The province’s rural policy does not have a sectoral focus, and aims at community empowerment and land occupancy.

To maximize returns on its rural policy investments, Québec needs to integrate social development more strongly with economic and entrepreneurial development, and further strengthen the supra-local level of government as the centre for rural and territorial development strategies. This should be combined with stabilisation measures in lagging areas, through the accumulation of human capital and enhanced access to land in predominantly rural territories. To address environmental challenges, natural resources should be protected both in the outskirts of metropolitan zones and in remote areas.