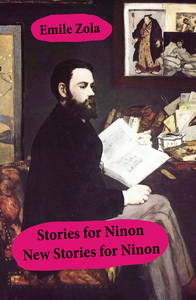 Originally titled "Contes à Ninon" (1864) and "Nouveaux Contes à Ninon" (1874).
Table of Contents:
Stories For Ninon:
To Ninon
Simplice
The Ball-Program
She Who Loves Me
The Love-Fairy
Blood
The Thieves And The Ass
Sister-Of-The-Poor
The Adventures Of Big Sidoine And Little Médéric

New Stories For Ninon:
To Ninon
A Bath
The Strawberries
Big Michu
The Fast
The Shoulders Of The Marchioness
My Neighbour Jacques
The Paradise Of Cats
Lili
The Legend Of Cupid’s Little Blue Mantle
The Blacksmith
The Slack Season
The Little Village
Souvenirs
Jean Gourdon’s Four Days