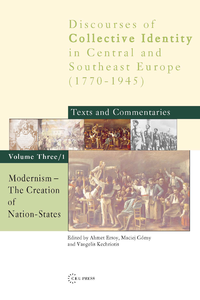 Modernism: The Creation of Nation-States — Ebook

This is the first part of the third volume of the four-volume series, a daring project of CEU Press, presenting the most important texts that triggered and shaped the processes of nation-building in the many countries of Central and Southeast Europe. The aim is to confront ‘mainstream’ and seemingly successful national discourses with each other, thus creating a space for analyzing those narratives of identity which became institutionalized as “national canons.” This is the first part of the third volume, containing 59 texts. This volume presents and illustrates the development of the ideologies of nation states, the “modern” successors of former empires. They exemplify the use modernist ideological framaeworks, from liberalism to socialism, in the context of the fundamental reconfiguration of the political system in this part of Europe between the 1860s and the 1930s. It also gives a panorama of the various solutions proposed for the national question in the region. Why, modernism and not modernity? Modernity implies the West, while modernism was the product of the periphery. The editors use it in a stricter sense, giving it a place between romanticism and anti-modernism, spanning from the 1860s until the decade following World War I.