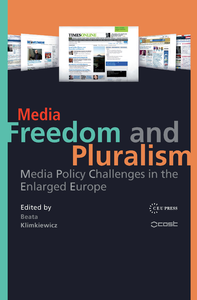 Addresses a critical analysis of major media policies in the European Union and Council of Europe at the period of profound changes affecting both media environments and use, as well as the logic of media policy-making and reconfiguration of traditional regulatory models. The analytical problem-related approach seems to better reflect a media policy process as an interrelated part of European integration, formation of European citizenship, and exercise of communication rights within the European communicative space. The question of normative expectations is to be compared in this case with media policy rationales, mechanisms of implementation (transposing rules from EU to national levels), and outcomes. Competent and experienced scholars of the subject describe and analyze the different patterns followed in the various countries, when attempting to adapt to the new conditions – technological, political and sociological (the media using habits of citizens). "Beata Klimkiewicz’s collection is nothing less than the timeliest book on the topic of European media policy and this for reasons that are intrinsic to the essence of most of the fourteen chapters. These chapters exemplify the continuing battle in regard to little regulation (some control) versus regulation (more control) versus overregulation (total control) and the realities that such choices engender; the continuing arguments over market media, public service media, and community media and how they should be regulated and shaped; and ultimately the quest for a new utopian European public sphere and equally utopian national media scenes in each EU member country. In well documented and argued chapters, western and eastern European scholars tackle issues such as the augmentation of the European public sphere; citizen access to and choices of information and news; regulations of content; developments in the blogosphere; the promotion of European “cultural diversity”; media and minors; media pluralism and diversity via public service broadcasting and its new functions and conceptualization; communication rights; and the governance shaping a European audiovisual landscape. As the EU enfolded many of the former communist countries into the bosom of the beautiful Europa, the ideational, conceptual, practical, and enforceability problems of media policies grew exponentially, as Klimkiewicz’s collection clearly demonstrates. The lessons from the overregulated, all-controlling policies of the now defunct Marxist-Leninist societies are yet to be internalized by the EU and the Council of Europe, it seems to me, and while they should seek to improve, as opposed to perfect, the European media world and public sphere, fewer policies that are less controlling and more responsive to the diverse realities of each member nation should be the order of the day. This book should be mandatory reading for students of the east European mass media and policymakers alike." - Slavic Review