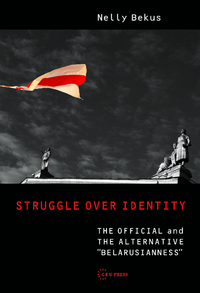 The Official and the Alternative “Belarusianness”

Rejecting the cliché about “weak identity and underdeveloped nationalism,” Bekus argues for the co-existence of two parallel concepts of Belarusianness—the official and the alternative one—which mirrors the current state of the Belarusian people more accurately and allows for a different interpretation of the interconnection between the democratization and nationalization of Belarusian society. The book describes how the ethno-symbolic nation of the Belarusian nationalists, based on the cultural capital of the Golden Age of the Belarusian past (17th century) competes with the “nation” institutionalized and reified by the numerous civic rituals and social practices under the auspices of the actual Belarusian state. Comparing the two concepts not only provides understanding of the logic that dominates Belarusian society’s self-description models, but also enables us to evaluate the chances of alternative Belarusianness to win this unequal struggle over identity.