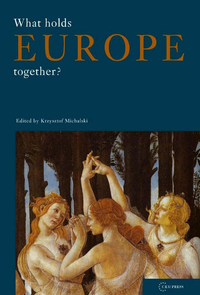 What Holds Europe Together? — Ebook

The book addresses contemporary developments in European identity politics as part of a larger historical trajectory of a common European identity based on the idea of 'solidarity.' The authors explain the special sense in which Europeans perceive their obligations to their less fortunate compatriots, to the new East European members, and to the world at large. An understanding of this notion of 'solidarity' is critical to understanding the specific European commitment to social justice and equality. The specificity of this term helps to distinguish between what the Germans call "social state" from the Anglo-Saxon, and particularly American, political and social system focused on capitalism and economic liberalism. This collection is the result of the work of an extremely distinguished group of scholars and politicians, invited by the previous President of the European Union, Romano Prodi, to reflect on some of the most important subjects affecting the future of Europe.