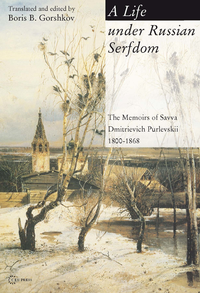 A Life Under Russian Serfdom — Ebook

The Memoirs of Savva Dmitrievich Purlevskii, 1800-1868

This is a translation of one of very few Russian serfs' memoirs. Savva Purlevskii recollects his life in Russian serfdom and life of his grandparents, parents, and fellow villagers. He describes family and communal life and the serfs' daily interaction with landlords and authorities. Purlevskii came from an initially prosperous family that later became impoverished. Early in his childhood, he lost his father. Purlevskii did not have a chance to gain a formal education. He lived under serfdom until 1831 when at the age of 30 he escaped his servitude. Gorshkov's introduction provides some basic knowledge about Russian serfdom and draws upon the most recent scholarship. Notes provide references and general information about events, places and people mentioned in the memoirs. Besides its appeal to scholars of Russian history, peasant studies, or servile systems such as serfdom and slavery, the illustrations and the conversational style will make this book highly suitable for undergraduate and graduate classes. "A fascinating autobiography of a self-made serf-entrepreneur, originally published in 1877... The book - elegantly printed by the Central European University Press and illuminated with nineteenth-century miniatures of peasant life - will surely provide an attractive teaching material for the courses on pre-Reform Russian history, as well as a good read for all those interested in social history of Russia". - The Russian Review