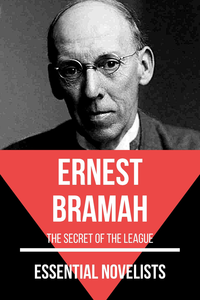 The Secret of the League

Welcome to the Essential Novelists book series, were we present to you the best works of remarkable authors. For this book, the literary critic August Nemo has chosen the two most important and meaningful novels of Ernest Bramah which are The Secret of the League and Kai Lung's Golden Hours. Ernest Bramah humorous works were ranked with Jerome K. Jerome and W. W. Jacobs, his detective stories with Conan Doyle, his politico-science fiction with H. G. Wells and his supernatural stories with Algernon Blackwood. George Orwell acknowledged that Bramah's book, What Might Have Been, influenced his Nineteen Eighty-Four. Bramah created the characters Kai Lung and Max Carrados. Novels selected for this book: - The Secret of the League. - Kai Lung's Golden Hours. This is one of many books in the series Essential Novelists. If you liked this book, look for the other titles in the series, we are sure you will like some of the authors.