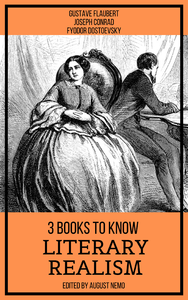 Welcome to the3 Books To Knowseries, our idea is to help readers learn about fascinating topics through three essential and relevant books. These carefully selected works can be fiction, non-fiction, historical documents or even biographies. We will always select for you three great works to instigate your mind, this time the topic is:Literary Realism: - Madame Bovary, by Gustave Flaubert - Heart of Darkness, by Joseph Conrad - The idiot, by Fyodor DostoyevskyLong established as one of the greatest novels, Madame Bovary has been described as a "perfect" work of fiction. Henry James wrote: "Madame Bovary has a perfection that not only stamps it, but that makes it stand almost alone: it holds itself with such a supreme unapproachable assurance as both excites and defies judgment." The realist movement was, in part, a reaction against romanticism. Emma may be said to be the embodiment of a romantic: in her mental and emotional process, she has no relation to the realities of her world. Heart of Darkness is a novel by Polish-British novelist Joseph Conrad about a narrated voyage up the Congo River into the Congo Free State in the so-called heart of Africa. Central to Conrad's work is the idea that there is little difference between so-called civilised people and those described as savages; Heart of Darkness raises questions about imperialism and racism. The title of The Idiot is an ironic reference to the central character of the novel, Prince Lev Nikolayevich Myshkin, a young man whose goodness, open-hearted simplicity and guilelessness lead many of the more worldly characters he encounters to mistakenly assume that he lacks intelligence and insight. In the character of Prince Myshkin, Dostoevsky set himself the task of depicting "the positively good and beautiful man." The novel examines the consequences of placing such a unique individual at the centre of the conflicts, desires, passions and egoism of worldly society, both for the man himself and for those with whom he becomes involved. This is one of many books in the series 3 Books To Know. If you liked this book, look for the other titles in the series, we are sure you will like some of the topics.