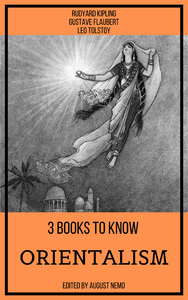 Welcome to the3 Books To Knowseries, our idea is to help readers learn about fascinating topics through three essential and relevant books. These carefully selected works can be fiction, non-fiction, historical documents or even biographies. We will always select for you three great works to instigate your mind, this time the topic is:Orientalism. - The Jungle Book by Rudyard Kipling. - Salammbo by Gustave Flaubert. - Hadji Murad by Leo Tolstoy.The Jungle Bookis a collection of stories by the English author Rudyard Kipling. Most of the characters are animals such as Shere Khan the tiger and Baloo the bear, though a principal character is the boy or "man-cub" Mowgli, who is raised in the jungle by wolves. The stories are set in a forest in India; one place mentioned repeatedly is "Seonee", in the central state of Madhya Pradesh. Salammbô is a historical novel by Gustave Flaubert. It is set in Carthage during the 3rd century BCE, immediately before and during the Mercenary Revolt which took place shortly after the First Punic War. Flaubert's main source was Book I of Polybius's Histories. The novel jumpstarted a renewed interest in the history of pre-Imperial Rome's conflict with the North African Phoenician colony of Carthage. Hadji Murat is a short novel written by Leo Tolstoy from 1896 to 1904 and published posthumously in 1912 (though not in full until 1917). The protagonist is Hadji Murat, an Avar rebel commander who, for reasons of personal revenge, forges an uneasy alliance with the Russians he had been fighting. This is one of many books in the series 3 Books To Know. If you liked this book, look for the other titles in the series, we are sure you will like some of the topics.