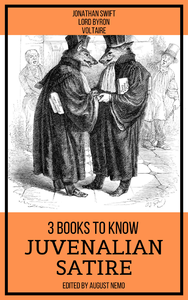 Welcome to the3 Books To Knowseries, our idea is to help readers learn about fascinating topics through three essential and relevant books. These carefully selected works can be fiction, non-fiction, historical documents or even biographies. We will always select for you three great works to instigate your mind, this time the topic is:Juvenalian Satire. - Don Juan by Lord Byron. - A Modest Proposal by Jonathan Swift. - Candide by Voltaire.Juvenalian satire is often to attack individuals, governments and organisations to expose hypocrisy and moral transgressions. For this reason, writers should expect to use stronger doses of irony and sarcasm in this concoction. Don Juan is a satiric poem by Lord Byron, based on the legend of Don Juan, which Byron reverses, portraying Juan not as a womaniser but as someone easily seduced by women. It is a variation on the epic form. Byron completed 16 cantos, leaving an unfinished 17th canto before his death in 1824. Byron claimed that he had no ideas in his mind as to what would happen in subsequent cantos as he wrote his work. A Modest Proposal, is a Juvenalian satirical essay written and published anonymously by Jonathan Swift in 1729. The essay suggests that the impoverished Irish might ease their economic troubles by selling their children as food for rich gentlemen and ladies. This satirical hyperbole mocked heartless attitudes towards the poor, as well as British policy toward the Irish in general. Candide is a French satire first published in 1759 by Voltaire. Candide is characterized by its tone as well as by its erratic, fantastical, and fast-moving plot. It begins with a young man, Candide, who is living a sheltered life in an Edenic paradise and being indoctrinated with Leibnizian optimism by his mentor, Professor Pangloss. The work describes the abrupt cessation of this lifestyle, followed by Candide's slow and painful disillusionment as he witnesses and experiences great hardships in the world. This is one of many books in the series 3 Books To Know. If you liked this book, look for the other titles in the series, we are sure you will like some of the topics.