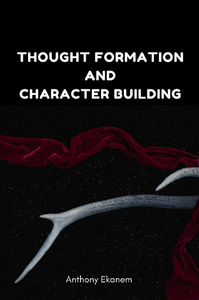 UNCONSCIOUSLY we are forming habits every moment of our lives. Some are habits of a desirable nature; some are those of a most undesirable nature. Some, though not so bad in themselves, are exceedingly bad in their cumulative effects, and cause us at times much loss, much pain and anguish, while their opposites would, on the contrary, bring as much peace and joy, as well as a continually increasing power. Do we have it within our power to determine at all times what types of habits shall take form in our lives? In other words, is habit-forming, character-building, a matter of mere chance, or have we it within our own control? We have, entirely and absolutely. "I will be what I will to be," can be said and should be said by every human soul. After this has been bravely and determinedly said, and not only said, but fully inwardly realized, something yet remains. Something remains to be said regarding the great law underlying habit-forming, character-building; for there is a simple, natural, and thoroughly scientific method that all should know. A method whereby old, undesirable, earth-binding habits can be broken, and new, desirable, heaven lifting habits can be acquired, a method whereby life in part or in its totality can be changed, provided one is sufficiently in earnest to know and, knowing it, to apply the law.