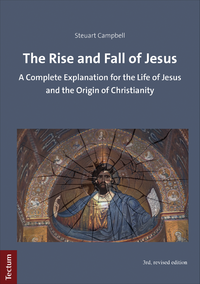 The Rise and Fall of Jesus — Ebook

What really happened to Jesus? Did he rise from the dead, and if not why do Christians believe that he did? Did he have a plan and, if so, what was it? Did he accomplish his purpose or did the plan fail? If it failed, what were the consequences? Steuart Campbell, once a Christian, takes a rationalist look at the problem of Christian origins and shows that no previous writer has completely solved the riddle of Jesus. Here he shows us a new hypothesis, one that explains Jesus' curious behaviour. Here is Jesus in historical context, the leader of an obscure Jewish sect which believed that it was fulfilling a divine plan revealed in the Scriptures. This plan required the Messiah to die and rise again to become the king of Israel, throwing the Romans out of Judaea and even replacing the Emperor as ruler of the known world. Read how Jesus expected to accomplish this. The author displays immense knowledge of the Bible and the history of the Jews and he explains many mysteries. He builds on the work of many other authors and constructs what is surely the true explanation for the origin of Christianity. This should be the last word on the historical Jesus. It is certainly an excellent review of the many attempts to solve the mystery.