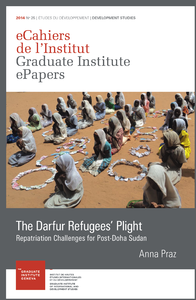 The Darfur crisis has left behind a profound legacy of displacement, with some 300,000 refugees camped on the Chadian side of the border and about 2 million displaced internally within Darfur. Despite a reduction in armed hostilities and violent casualties since 2006, as well as a peace agreement signed at Doha in 2011, limited signs of voluntary repatriation are visible from eastern Chad; where refugees are seemingly willing, but not ready, to return. Further to the Doha peace settlement, they require genuine peace to be in place on the ground, marked by visible changes in the security landscape of Sudan. In particular, they ask for the prosecution of war criminals, disarmament of local militias, adequate compensation for human and physical losses, local reconstruction, and the departure of populations who have settled on their lands in the aftermath of mass atrocities. The marked demographic changes having taken place in Darfur over the past decade, and a ‘peace’ that fails to fully address impunity and be widely accepted, make the fulfillment of these requests seem far-fetched at present. While voluntary return is being discussed nationally and regionally, refugees underscore their profound need for justice and personal safety by remaining in the camps. When and how conditions for safe and dignified return will be met is something they are stillcarefullyconsidering.