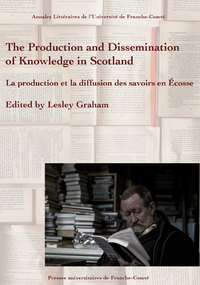 The Production and Dissemination of Knowledge in Scotland

Education and learning have traditionally been areas in which the national specificity has been promoted and asserted in Scotland and apparently with good reason since for several centuries the Scottish population could claim to be the most thoroughly educated in the world. This achievement was the consequence of the nation’s love affair with the transmission of basic knowledge through schooling and intellectual inquiry which started with the Reformation and culminated in the Scottish Enlightenment. As a whole, this collection aims to show some small part of the breadth of knowledge created in Scotland and disseminated in and outwith the country. This broad field of interest echoes the wider range of subjects traditionally taught in Scottish schools. It attempts to highlight what is distinctive about the Scottish approach to knowledge acquisition in general while also presenting the areas in which this endeavour overlaps with similar concerns in the rest of the world. The overall impression created is that of a country consistently confident in its ability to create useful knowledge; capable of applying that knowledge at home and of sharing it with others.