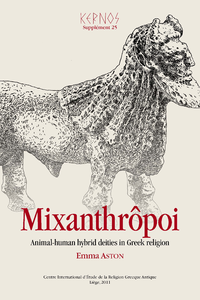 Many of the beings in this book – Cheiron, Pan, Acheloos, the Sirens and others – will be familiar from the narratives of Greek mythology, in which fabulous anatomies abound. However, they have never previously been studied together from a religious perspective, as recipients of cult and as members of the ancient pantheon. This book is the first major treatment of the use of part-animal – mixanthropic – form in the representation and visual imagination of Greek gods and goddesses, and of its significance with regard to divine character and function. What did it mean to depict deities in a form so strongly associated in the ancient imagination with monstrous adversaries? How did iconography, myth and ritual interact in particular sites of worship? Drawing together literary and visual material, this study establishes the themes dominant in the worship of divine mixanthropes, and argues that, so far from being insignificant curiosities, they make possible a greater understanding of the fabric of ancient religious practice, in particular the tense and challenging relationship between divinity and visual representation.