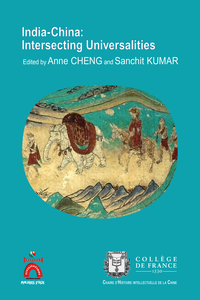 This collection of articles is mainly the result of an international conference organised by the Chair of Chinese Intellectual History at the Collège de France in June 2017. Entitled “India-China: Intersecting Universalities”, it brought together scholars from Asia, America and Europe who have been interested in one aspect or other of the cultural interactions between India and China. The diversity of the topics testifies to the lively interest raised by the intersection of two heavyweights of area and cultural studies. What makes the relationship between “China” and “India” so remarkably interesting is that one can hardly imagine two civilisational worlds as radically different from each other, which yet managed somehow to come into contact and to interact. The aim of the present volume is to look at various aspects of the cultural exchanges between India and China at different points of history. It is to try and remedy a certain indifference and mutual ignorance in our day and age that we bring forward this collective venture with the hope of offering to our readers alternative approaches to the connections between these two “giants of Asia”, other than the merely geopolitical ones that fill our media today.