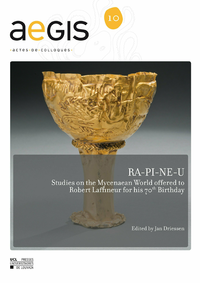 This volume, in honour of one of the Odysseuses in Aegean archaeology, Professor Robert Laffineur, comprises a combination of papers presented during a seminar series on recent developments in Mycenaean archaeology at the Université de Louvain during the academic year 2015-2016. These were organised within the frame of the ARC13/18-049 (concerted research action) ’A World in Crisis?’To these are added a series of papers by friends of Robert Laffineur who were keen to offer a contribution to honour him foremost as a friend and scholar in his own right but also as editor of a respected international series founded by him - Aegaeum - and as the driving force and inspiration behind the biannual Aegean meetings that have travelled the world. Several papers within touch scientific domains close to Robert’s heart while others present new excavations or new interpretations of known data.