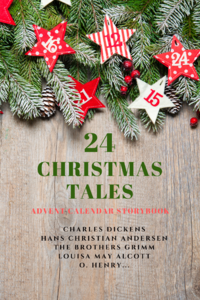 Every day in December, discover with this Advent Calendar Storybook a wonderful Christmas tale!

Written by the greatest storytellers (Charles Dickens, Hans Christian Andersen, The Brothers Grimm, Louisa May Alcott, O. Henry...), these 24 traditional stories will keep you waiting until D-day. This collection ends with one of Charles Dickens' most beautiful Christmas tales, the story of Scrooge and the three spirits.

1st December The Gift of the Magi by O.Henry

2nd December A Christmas Dream, and How It Came to Be True by Louisa May Alcott

10th December How the Captain Made Christmas by Thomas Nelson Page

21st December The Elves and The Shoemaker by The Brothers Grimm

23rd December The Night Before Christmas: A Morality by William Dean Howells