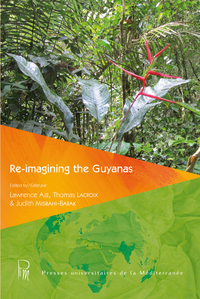 French Guyane, Guyana and Suriname are not often focused on. Sometimes French Guyane is believed to be an island, and one often wonders where Guyana is situated, or Suriname. This collection of essays aims to increase the visibility of the Guyanas and more particularly of the three countries mentioned above. It also means to contribute to scholarship already published and share the knowledge across various disciplinary fields. It will question the traditional divide between disciplines as the best way to approach such complex territories that contain many geographies, histories, languages and cultures. Moving away from simplistic and binary perspectives, the contributors of the volume address these questions that revisit colonial and postcolonial identities, and the porosity between their borders. What can the Guyanas do for us and what can we do for them? Creative and academic writers such as Gaiutra Bahadur, Sonja Boon, Janette Bulkan, Juanita Cox, Tim Cribb, Cyril Dabydeen, Charles Forsdick, Lisa Katharina Grund, Kathleen Gyssels, Natalie Hopkinson, Ateeka Khan, Sinah Kloß, Michael Mitchell, Gabriel Cambraia Neiva, Clem Seecharan, Janice Lowe Shinebourne, explore their Guyanas and others’.