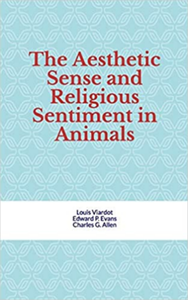 The Aesthetic Sense and Religious Sentiment in Animals — Ebook

This book deals with the aesthetic sense and religious sentiment in animals. "The mind of animals is a very old subject of discussion. Descartes and his school regarded an animal as a mere piece of machinery, like a clock or a turnspit. For man alone they reserved intelligence, meaning by that, memory, feeling, will, and reason. The story of Malebranche is well known: As he was going into his convent at the Oratory with a friend, a little bitch ran up and fawned on him; he gave her a kick which sent the poor beast yelping off, and when his friend expressed surprise that so gentle, kindly, and Christian a person returned kicks for caresses, he exclaimed, "What! do you really suppose that that animal had any feeling?" Thus Malebranche not merely believed he had not wounded or grieved her; he even thought he had caused her no physical pain. This was denying clear proof, and pushing faith in his master's doctrine to absurdity. On the other hand, Montaigne, Leibnitz, La Fontaine, Bayle, Condillac, Madame de Sévigné, agreeing with all antiquity, from Pythagoras to Galen, assert that animals have all the organs of sensation and of feeling; that they possess will, desires, memory, ideas, combinations of ideas, and even the power of performing some moral acts, such as entertaining attachment like that a dog feels for his master, or a hen for her chicks; or, like "that very just equality which they practise in dividing food or other good things among their young," as Montaigne says; and that therefore the intelligence of animals, if not equal to man's, is at least like it, and that the differences between the oyster anchored to its rock and the homo sapiens of Linnæus are merely differences between more and less, degrees of succession that make up what is called the scale of being. It is the latter opinion that has been declared triumphant by the researches of natural history and those of comparative anatomy alike. On this point science has reached certainty, and every one, reading the story of "the two Rats, the Fox and the Egg," says now with La Fontaine: "After that tale, where's the pretenseThat animals are lacking sense?"