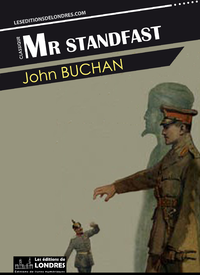 “Mr Standfast” is a spy novel featuring Richard Hannay, written by John Buchan and published in 1919 by Hodder & Stoughton. Richard Hannay is recalled from the Western Front by his good friend Bullivant in order to be assigned a new mission. As always, the whole action revolves around identifying a master German spy who operates in Britain along with his agents. In order to find him out, he must adopt a disguise he truly dislikes, the one of a pacifist. He then travels to the Cotswolds as Cornelius Brand, a South African war objector, in order to penetrate a group of war-hating intellectuals. He falls in love with a young woman called Mary who is also part of the group. John Buchan is the inventor of the modern British spy novel.