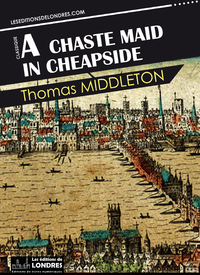 A chaste maid in Cheapside — Ebook

« A Chaste maid in Cheapside » is a « city comedy » written in 1613 by Thomas Middleton. The maid at the center of the story is Moll Yellowhammer, the daughter of a rich Cheapside goldsmith. Her father wants to marry her to Whorehund, whom she does not like, whilst she is in love with a man called Touchwood Junior. Her intended husband has promised one of his mistresses to Moll’s brother, whilst he himself is having an affair with a married woman.