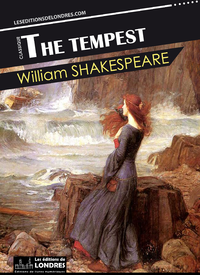 "The Tempest" is a play written by William Shakespeare in 1610 or 1611, believed to be the last play of the Bard. To us, it might be his best: the most astonishing alchemy of tragedy and comedy, of morals and magic, and a treasure cove of some of the most memorable Shakespearean scenes. Prospero, the deposed Duke of Milan, and his daughter Miranda, are stranded on an island with for only companions the monster Caliban and the spirit Ariel. When a ship carrying his brother responsible for his plight passes by, Prospero uses his magical powers to start a tempest, ending with the shipwrecked passengers stranded on the same island. From then on, it becomes... magical. Just listen:
“Be not afeard: the isle is full of noises,
Sounds, and sweet airs, that give delight, and hurt not.
Sometimes a thousand twangling instruments
Will hum about mine ears; and sometimes voices...”.
Magical, no? Rediscover The Tempest with an original preface and biography in this new edition by Les Éditions de Londres.