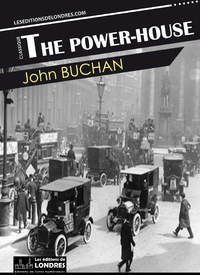 "The Power-House" is a spy novel written by John Buchan in 1913. It is set in London, and tells the story of a lawyer and MP who discovers an incredible plot aimed at destroying the foundations of Western democracies through an anarchist organisation called The Power-House. “The power-house” was first serialised in Blackwood’s magazine and then was released as a book in 1916. Preceding the famous The Thirty-Nine steps, little known, The Power-House is a fascinating spy novel. Filled with considerations about civilization and chaos, Nietzschean references, predictions about the future, Buchan’s “The Power-House” is political philosophy wrapped into a thriller inside conspiracy theory. A must-read, if only for the first encounter between the hero & narrator and the head of the Power-House. Discover The Power-House with an original preface and biography in this new edition by Les Éditions de Londres.