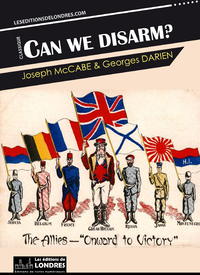 Can we disarm? — Ebook

“Can we disarm?” is a 1899 political essay by Joseph McCabe and Georges Darien. In this little-known visionary essay, the English religious philosopher and the French anarchist libertarian offer the reader a fascinating insight into the logic of European States. They analyse the reasons for keeping pretorian armies, the impact of the Franco-Prussian war on military and social doctrines, describe why sovereigns and governments then decided to create national armies, the link with capitalism and labour markets, the implications for skyrocketing national debts and they conclude by offering futuristic insights about upcoming World War One. Discover this thrilling and deep essay analysing the relations between military spending, capitalism and social control by two of the most insightful thinkers of the late Nineteenth century.