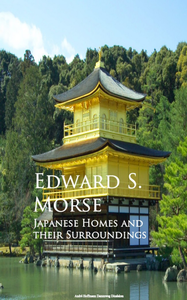 Japanese Homes and their Surroundings — Ebook

Within twenty years there has gradually appeared in our country a variety of Japanese objects conspicuous for their novelty and beauty,—lacquers, pottery and porcelain, forms in wood and metal, curious shaped boxes, quaint ivory carvings, fabrics in cloth and paper, and a number of other objects as perplexing in their purpose as the inscriptions which they often bore. Most of these presented technicalities in their work as enigmatical as were their designs, strange caprices in their ornamentation which, though violating our hitherto recognized proprieties of decoration, surprised and yet delighted us. The utility of many of the objects we were at loss to understand; yet somehow they gradually found lodgment in our rooms, even displacing certain other objects which we had been wont to regard as decorative, and our rooms looked all the prettier for their substitution. We found it difficult to formulate the principles upon which such art was based, and yet were compelled to recognize its merit. Violations of perspective, and colors in juxtaposition or coalescing that before we had regarded as inharmonious, were continually reminding us of Japan and her curious people. Slowly our methods of decoration became imbued with these ways so new to us, and yet so many centuries old to the people among whom these arts had originated. Gradually yet surely, these arts, at first so little understood, modified our own methods of ornamentation, until frescos wall-papers, wood-work and carpets, dishes and table-cloth metal work and book-covers, Christmas cards and even railroad advertisements were decorated, modelled, and designed after Japanese style. It was not to be wondered at that many of our best artists,—men like Coleman, Vedder, Lafarge, and others,—had long fore recognized the transcendent merit of Japanese decorative art. It was however somewhat remarkable that the public at large should come so universally to recognize it, and in so short a time.