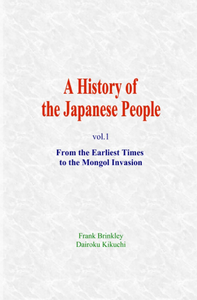 A History of the Japanese People — Ebook

(Vol.1) From the Earliest Times to the Mongol

If you wish to know really any people, it is necessary to have a thorough knowledge of their history, including their mythology, legends and folk-lore: customs, habits and traits of character, which to a superficial observer of a different nationality or race may seem odd and strange, sometimes even utterly subversive of ordinary ideas of morality, but which can be explained and will appear quite reasonable when they are traced back to their origin. There is no race of people in whose origin we are more interested than in that of the Japanese. Their history going so completely back for nearly two thousand years, their civilization, which in so many respects parallels our own—the various epochs in our history being typified again and again by similar ages in Japan—all excite our deepest interest. (Edward S.Morse)