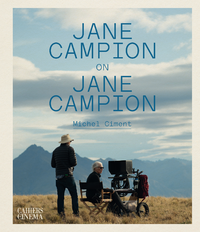 Jane Campion on Jane Campion offers a unique perspective on the creative process of one of the greatest contemporary film directors, through a series of interviews from the early days of Campion’s career to her most recent projects, conducted by Michel Ciment. Each chapter contains the study of a film, starting with the short films that Campion made during her film studies at the Australian Film Television and Radio School and ending with her last film, The Power of the Dog. A biographical study and a general essay place her work in context.

Organized chronologically, film by film, the interviews are illustrated by film stills and photographs taken on set, annotated scripts, storyboards and personal documents lent by Campion.

The book also reproduces three short stories and a text about the poet John Keats written by the director, along with actress Holly Hunter’s ‘Scattered Memories’ of their collaboration on The Piano and Top of the Lake. A detailed bibliography and a filmography of the filmmaker complete this reference work, which contains more than 300 colour and black-and-white images.

MICHEL CIMENT, coordinator of the French film magazine Positif, has been a contributor to the French radio programme Le Masque et la Plume (France Inter) since 1970 and produced Projection privée for the radio station France Culture for 26 years. Senior Lecturer Emeritus in American Civilization at Paris Diderot University, he is also the author of some 30 books about the cinema, including Kubrick, Kazan on Kazan, Conversations with Losey, Film World: interviews with cinema’s leading directors and Boorman (British Film Institute Prize).

The first French edition of this book was awarded a prize for the best film book by the French Syndicate of Cinema Critics.

Reading recommended on pads and smartphone for an optimal experience of color illustrations.