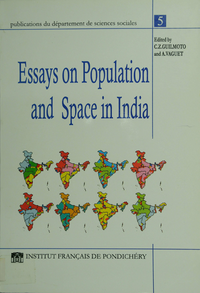 Essays on population and space in India — Ebook

Indian territory, from regional to local level, remains a fundamentally composite space, divided into varying segments of more homogeneous appearance. Closer analysis shows that these segments are themselves subdivided and that spaces and resources are unequally shared and often disputed among social groups. The chapters in this volume, each in its own way, illustrate the ubiquity of oppositions running across the regions, irrespective of the level of analysis chosen. The resulting image of India is that of a complex and fast evolving system characterized by strong social and historical Patterning as well as extensive spatial recombination. This collection of essays, first published in France in 1997 and based on abundant cartographic materials, brings together a selection of studies by geographers and other social scientists on India, covering a large variety of topics : population dynamics, rural-urban linkages, spatial discrimination, health issues, minorities, etc. These varied research interests open a large number of areas related to spatial organization in India, integrating demographic, economic and anthropological questions and illustrate the relevance of an informed geographical perspective for the study of social transformation in India. The authors would readily agree on the modesty which these essays are bound to evidence, so rich and embedded is the fabric of Indian space. Readers henceforth have more material to form, in their turn, new images reflecting contemporary India and its transitional geography.