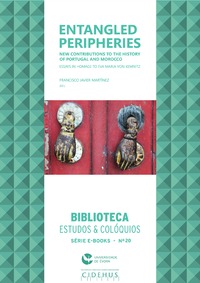 Entangled peripheries. New contributions to the history of Portugal and Morocco — Ebook

The main aim of this volume is to explore the continuity of Portuguese-Moroccan relations before and, especially, after the classic period of the 11th-16th centuries. Its title, “Entangled peripheries”, is a conceptual attempt to account for the contradiction between the resilience of bilateral contacts and exchanges and its decreasing relevance for both sides of the Strait of Gibraltar. Although most chapters focus on topics of the 18th-20th centuries, the contributions dealing with the medieval and early modern periods provide a long durée perspective typical of “entangled history”. Other distinctive elements of this historiographical current are also present, such as the circulations and networks of people and objects and the supranational and regional actors and processes, which help situate Portugal and Morocco as “peripheries”. The volume is divided in three sections: “Marginal circulations”, “Facts, histories, fictions” and “Beyond nationalism and colonialism”. The first one presents case-studies of displacements of ethnically or socially marginal groups between Morocco and Portugal between the 15th and the 20th centuries. The last section’s examines how regional, imperial and global processes far outweighed bilateral relations across the Strait of Gibraltar both before and after the classic period of the 11th-16th centuries. Finally, the middle section of this volume engages with the “entangled peripheries” approach not literally as the other two but in a meta-sense, by focusing on historical sources, historiography and historical fiction.