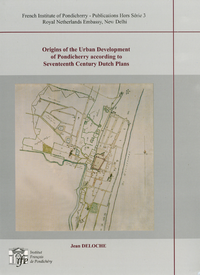 The modem plan of Pondicherry shows a large town in gridiron plan which obviously was extended to its present form through controlled urban development. Some Indian scholars consider that the town was built according to the principles of the ancient Hindu treatises of architecture, particularly the Silpa Sastra. French historians, on the other hand, feel that the plan should be considered as an achievement of «the French mind». In fact, the Dutch plans of Pondicherry dated 1693-1694, preserved at the National Archives at The Hague, show that the orthogonal street pattern of the town is a creation of the Dutch. The plans of 1693 show that, in François Martin's settlement, the streets or lanes were following an irregular pattern, without any shape or symmetry, whereas, in the plans drafted in 1694, during the Dutch occupation, one finds the design of a large new town, with a very regular geometric layout, rectangular blocks of houses, separated by straight streets, intersecting at right angles. This great urban project of the Dutch Company was adopted by the French who systematically carried out the extensive straightening out of streets into a planned grid, during the the first half of the 18th century.