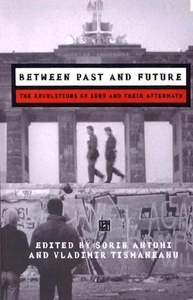 Between Past and Future — Ebook

The Revolutions of 1989 and their Aftermath

"The list of contributors is impressive withnot a single dull chapter...; the editors are to be congratulated for making available such a stimulating and timely, if not timeless, collection" - Slavic Review "[T]his is a book that will serve many intellectual tastes and interests, and that will certainly prove thought provoking for anyone who reads it... I recommend it to anybody who wants to witness the analythical depth and span with which the meaning of 1989 can be approached." - Extremism & Democracy The tenth anniversary of the collapse of communism in Central and Eastern Europe provides the starting point for this thought-provoking analysis. Between Past and Future reflects upon the past ten years and considers what lies ahead for the future. An international group of distinguished academics and public intellectuals, including former dissidents and active politicians, engage in a lively exchange on the antecedents, causes, contexts, meanings and legacies of the 1989 revolutions. At a crossroads between past and future, the contributors to this seminal volume address all the crucial issues -- liberal democracy and its enemies, modernity and discontent, economic reforms and their social impact, ethnicity, nationalism and religion, geopolitics, electoral systems and political power, European integration and the tragic demise of Yugoslavia. Based on the results of recent research on the ideologies behind one of the most dramatic systematic transformations in world history, and including contributions from some of the world's leading experts, Between Past and Future is an essential reference book for scholars and students of all levels, policy-makers, journalists and the general reader interested in the past and future prospects of Central & Eastern Europe