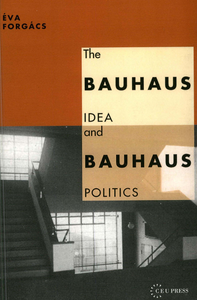 Art historian Éva Forgács's book is an unusual take on the Bauhaus. She examines the school as shaped by the great forces of history as well as the personal dynamism of its faculty and students. The book focuses on the idea of the Bauhaus - the notion that the artist should be involved in the technological innovations of mechanization and mass production - rather than on its artefacts. Founded in 1919 by the architect Walter Gropius and closed down by the Nazis in 1933, the Bauhaus had to struggle through the years of Weimar Germany not only with its political foes but also with the often-diverging personal ambitions and concepts within its own ranks. It is the inner conflicts and their solutions, the continuous modification of the original Bauhaus idea by politics within and without, that make the history of the school and Forgács's account of it dramatic.