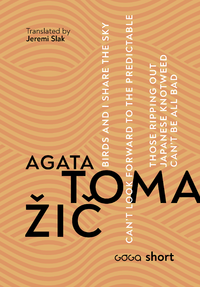 Birds and I share the sky. Can't look forward to the predictable. Those ripping out Japanese knotweed can't be all bad. — Ebook

At large, the heroes and heroines of Agata Tomažič's stories appear to be entirely unremarkable people, leading perfectly ordinary lives until ... something absurd happens —like the pompous yuppie who starts morphing into a frog — or something ordinary, but out of order. "Those Ripping Out Japanese Knotweed Can't Be All Bad" is the first-person account of a woman who meets her future partner at a knotweed extermination project and whose tale, comical at times, addresses the sombre subject of domestic violence. All her stories wow the reader with peculiar language, dark humour, and surprising turns.

Agata Tomažič (b. 1977) first impressed the readership with her extraordinary journalistic contribution to a central national newspaper house. Her departure from the ranks of the press was marked by a travelogue collection of literary reportage. Why Travel to Such Places?, which was published in 2016 (and received the prize for best Slovene travelogue), though domestic letters circles had already expressed admiration for her collection of short stories, Things You Can't Tell Your Hairdresser, a year before. In 2017, the publisher Goga released her debut novel, Right Below the Sky.