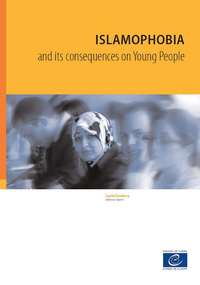 Islamophobia and its consequences on young people — Ebook

Islamophobia can be defined as the fear of or prejudiced viewpoint towards Islam, Muslims and matters pertaining to them. Whether it takes the shape of daily forms of racism and discrimination or more violent forms, Islamophobia is a violation of human rights and a threat to social cohesion. Young people are of course not immune to this. Young men and women are obviously affected when they become targets of Islamophobic attacks and abuse. But, just as importantly, they are also concerned by the general rise in discrimination and xenophobia, whether it be active or passive. At this seminar held in Budapest in June 2004, Islamophobia was discussed within the wider context of racism and discrimination in Europe, in new and old forms. The discussions also covered the troubling resurgence of Anti-Semitic attacks, Romaphobia and segregation of Roma communities and persistent forms of discrimination against visible minorities.The report of Ingrid Ramberg provides a personal account of the issues raised at the seminar as well as a very useful documentation of the presentations, workshops and debates. It also includes a series of policy recommendations aimed at preventing Islamophobia and fostering intercultural respect and coopération.