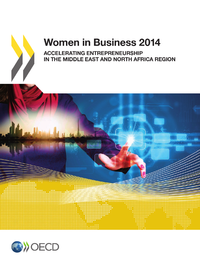 Accelerating Entrepreneurship in the Middle East and North Africa Region

Women in Business 2014 summarises the progress made by the OECD-MENA Women Business Forum (WBF) since the publication of its first Women in Business report in 2012. In 2012, five groups of actions had been identified as priorities to be carried out by governments, international stakeholders, financial and business support organisations, as well as statistical agencies. In two years, the WBF has developed inputs for three of these areas of priority actions. The WBF’s contributions are growing along with its increased recognition as a hub which spurs concrete improvements in the business climate for women entrepreneurs in the MENA region.

Today, women’s entrepreneurship is all the more important as governments in the region are facing the colossal challenge of rebooting job creation to improve the well-being of a growing workforce and confidence in the economy. The economic prospects of MENA economies that are going through a political transition have improved but unemployment has increased, inflation is rising and public finances have deteriorated. In these countries, political uncertainties add to long term structural difficulties. In the Gulf Cooperation Council (GCC) countries, the challenges still lie in the diversification of their economies.