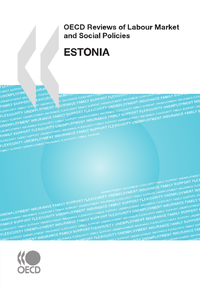 OECD's comprehensive 2010 review of labour market and social policies in Estonia. It finds that since Estonia regained its independence in 1991, its labour and social policies have been marked by a strong commitment to fiscal prudence, flexible markets, and work incentives. Labour market performance steadily improved during the mid-1990s and beyond, until the advent of the global economic crisis in 2008. Estonia was not well prepared for the slowdown and its economy has been hit especially hard. The downturn has required painful policy adjustments. Today, Estonia’s public social spending remains among the lowest in the OECD; its social programmes support persons in need, but the benefits they receive are usually modest and some of the jobless receive no benefits. However, the country offers one of the world's most generous parental-benefit programmes and has begun to phase in a three-tier pension system.