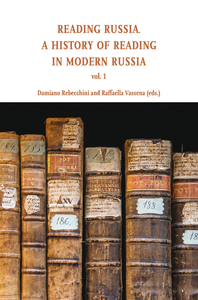 A History of Reading in Modern Russia

Scholars of Russian culture have always paid close attention to texts and their authors, but they have often forgotten about the readers. These volumes illuminate encounters between the Russians and their favorite texts, a centuries-long and continent spanning “love story” that shaped the way people think, feel, and communicate. The fruit of thirty-one specialists’ research, Reading Russia represents the first attempt to systematically depict the evolution of reading in Russia from the eighteenth century to the present day. The first volume of Reading Russia describes the slow evolution of reading between the end of the seventeenth and the beginning of the nineteenth century. During the reign of Peter the Great, the changes initially concerned a limited number of readers from court circles, the ecclesiastical world, the higher aristocracy and the Academy of Sciences, that considered reading as a potent way of regulating the conduct of the people. It was only under the modernisation programme inaugurated by Catherine the Great that transformations began to gain pace: the birth of private publishers and the widening currency of translations soon led to the formation of an initial limited public of readers from the nobility, characterised by an increasing responsiveness to European models and by its gradual emancipation from the cultural practices typical of the ecclesiastical world and of the court.