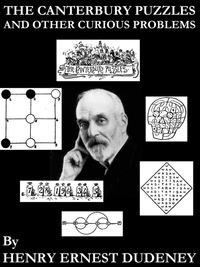 The Canterbury Puzzles and Other Curious Problems — Ebook

Henry Ernest Dudeney (1857–1930) was an English author and mathematician who specialised in logic puzzles and mathematical games. He is known as one of the country's foremost creators of puzzles.

The Canterbury Puzzles and Other Curious Problems is a 1907 mathematical puzzle book by Henry Dudeney. The first part of the book features a series of puzzles based on the characters from The Canterbury Tales by Geoffery Chaucer.

The ebook contains illustrations, explanations and answers to each puzzle and is still actual in testing your mathematical skills and your capacity of problem solving.

"It is a book of remarkable ingenuity and interest."—Educational Times.
"The most ingenious brain in England ... a fascinating new book."—Evening News.
"A capital book of posers."—Daily News.
"The Puzzles ... reach the limit of ingenuity and intricacy; and it is well for the sanity of his readers that the author gives a list of solutions at the end of the book."—Observer.
"A book that will provide much entertainment for Christmas gatherings ... ingenious puzzles and problems invented by 'Sphinx,' the Puzzle King."—The Captain.
"Mr. Dudeney, whose reputation is world-wide as the puzzle and problem maker of the age ... sure to find a wide circulation ... as attractive in appearance as its contents are fascinating."—English Mechanic and World of Science.
"An exceedingly ingenious constructor and solver of fascinating puzzles, mathematical and otherwise."—School Guardian.
"A book which ought to be highly popular ... it is all mighty ingenious, and very intelligently put before the reader."—Sheffield Telegraph.
"It is matter for delight that Mr. Henry E. Dudeney has collected into a volume those mysterious puzzles of his which have appeared in many journals ... contains quite a number of ingenious new mental problems ... a valuable introduction."—The Lady.
"For the long winter evenings Mr. Dudeney's book of puzzledom is to be recommended. Mr. Dudeney has made a study of every kind of puzzle there is ... he supplies you with every kind of brain-twister."—The Daily Chronicle.
"Took up more of the reviewer's time than he could well afford to give it; he wanted to solve some of the curious problems that it contains, and for ingenious persons who want employment on a wet day, he promises from it abundant scope."—Yorkshire Post.
"A well-known master puzzler ... provides an abundance of seasonable occupation for the ingenious, with an introduction on the general question of puzzles, which is one of the most interesting parts of the book. He is a skilful inventor."—Nottingham Guardian.
"Will enjoy the entertainment provided ... ingenious and witty."—The Guardian.
"Extremely ingenious book, which abounds in problems that will keep the reader busy for hours—until in despair he turns to the answers at the end."—Manchester Guardian.
"The setting of these perplexities is novel ... a dramatic background being thus provided which prevents too great aridity.... The book should be much in request."—The Morning Leader.