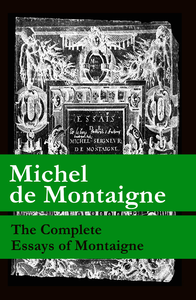 This carefully crafted ebook: “The Complete Essays of Montaigne (107 annotated essays in 1 eBook + The Life of Montaigne + The Letters of Montaigne)” is formatted for your eReader with a functional and detailed table of contents.

Table of Contents:
Preface.; The Life of Montaigne; The Letters of Montaigne.; The Author to the Reader.; Book the First; That Men by Various Ways Arrive at the Same End.; Of Sorrow; That Our Affections Carry Themselves Beyond Us; That the Soul Expends its Passions Upon False Objects, where the True are Wanting; Whether the Governor of a Place Besieged Ought Himself to Go Out to Parley; That the Hour of Parley Dangerous; That the Intention is Judge of Our Actions; Of Idleness; Of Liars; Of Quick or Slow Speech; Of Prognostications; Of Constancy; The Ceremony of the Interview of Princes; That Men are Justly Punished for Being Obstinate in the Defence of a Fort that is Not in Reason to Be Defended; Of the Punishment of Cowardice; A Proceeding of Some Ambassadors; Of Fear; That Men are Not to Judge of Our Happiness Till After Death.; That to Study Philosopy is to Learn to Die; Of the Force of Imagination; That the Profit of One Man is the Damage of Another; Of Custom, and that We Should Not Easily Change a Law Received; Various Events from the Same Counsel; Of Pedantry; Of the Education of Children; That it is Folly to Measure Truth and Error by Our Own Capacity; Of Friendship; Nine and Twenty Sonnets of Estienne De La Boitie; Of Moderation; Of Cannibals; That a Man is Soberly to Judge of the Divine Ordinances; That We are to Avoid Pleasures, Even at the Expense of Life; That Fortune is Oftentimes Observed to Act by the Rule of Reason; Of One Defect in Our Government; Of the Custom of Wearing Clothes; Of Cato the Younger; That We Laugh and Cry for the Same Thing; Of Solitude; A Consideration Upon Cicero; That the Relish for Good and Evil Depends in Great Measure Upon the Opinion We have of Them; Not to Communicate a Man’s Honour; Of the Inequality Amoungst Us.; Of Sumptuary Laws; Of Sleep; Of the Battle of Dreux; Of Names; Of the Uncertainty of Our Judgment; Of War Horses, or Destriers; Of Ancient Customs; Of Democritus and Heraclitus; Of the Vanity of Words; Of the Parsimony of the Ancients; Of a Saying of Caesar; Of Vain Subtleties; Of Smells; Of Prayers; Of Age; Book the Second; Of the Inconstancy of Our Actions; Of Drunkenness; A Custom of the Isle of Cea; To-Morrow’s a New Day; Of Conscience; Use Makes Perfect; Of Recompenses of Honour; Of the Affection of Fathers to Their Children; Of the Arms of the Parthians; Of Books; Of Cruelty; Of Judging of the Death of Another; That Our Mind Hinders Itself; That Our Desires are Augmented by Difficulty; Of Glory; Of Presumption; Of Giving the Lie; Of Liberty of Conscience; That We Taste Nothing Pure; Against Idleness; Of Posting; Of ILL Means Employed to a Good End; Of the Roman Grandeur; Not to Counterfeit Being Sick; Of Thumbs; Cowardice the Mother of Cruelty; All Things have Their Season; Of Virtue; Of a Monstrous Child; Of Anger; Defence of Seneca and Plutarch; The Story of Spurina; Observation on the Means to Carry on a War According to Julius Caesar; Of Three Good Women; Of the Most Excellent Men; Of the Resemblance of Children to Their Fathers; Book the Third; Of Profit and Honesty; Of Repentance; Of Three Commerces; Of Diversion; Upon Some Verses of Virgil; Of Coaches; Of the Inconvenience of Greatness; Of the Art of Conference; Of Vanity; Of Managing the Will; Of Cripples; Of Physiognomy; Of Experience.

Michel de Montaigne (1533 – 1592) was one of the most influential writers of the French Renaissance, known for popularizing the essay as a literary genre, and commonly thought of as the father of modern skepticism.